This page is about the Victorian industrial model village of Ripley Ville 1866-1881 and introduces its main sponsor Henry Wm Ripley – dyemaster at the nearby Bowling Dyeworks and controversial local politician. You can find our more about the village by using the tag cloud in the side-bar right. Words in bold below appear in the tag cloud.

Ripley Ville was the last of the Victorian industrial model villages to be built in the old West Riding of Yorkshire. Built between 1866 and 1881 it contained Workmens Dwellings, a schools building and a school master’s house, an Anglican church, vicarage and alms houses. It was built across two sites to the north and south of Bowling Dyeworks in Bowling to the south of Bradford.

What was built, where and when:-

November 15th 2015, was the 150th anniversary of the event at which ‘Messrs Ripleys Scheme for building a number of Working Mens’ Dwellings’ was first promoted. 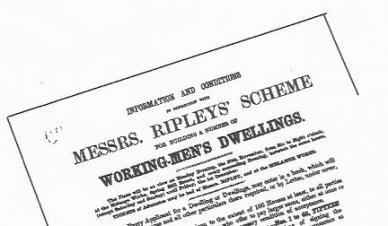 The contracts for building the working mens’ dwellings were advertised in the Bradford Observer between March 1866 and March 21st 1867.

The dwellings would be of three sizes and types. They were built to a standard in advance of the day with plans for water-closets in the cellars of every house. The site for the houses was by 1871 bounded by railway lines to three sides, It was on a triangle of land between east and west Bowling in south Bradford and immediately to the north of Bowling Dyeworks. (Bowling) Hall Lane lay to the east. 196 such properties made up the bulk of the buildings on what became the village’s northern site.

Some properties also saw early use as shops (see ‘shops and inn’ below). A right-angled (orthogonal) grid of roads was completed by; Ellen Street to the north (overlooking a deep railway cutting), Linton Street at the heart the village and Merton Street to the southern end.

Included within the housing contracts or added to the contracts as they were carried out, were a number of shops in the end-terrace properties on Linton Street. A public house, later called the ‘Locomotive‘ and not part of the village, already existed on the corner of Ellen Street and what became Vere Street. An inn, called the ‘Gibson Arms‘ on Linton Street and part of the village would seem to be a later conversion of one and later two properties to that use. – at a date that is as yet uncertain.

In 1868, the Ripleyville ‘schools’ – a single building for boys, girls and infants – were built as well as a house for the Schoolmaster. They were added to the northern site of the village between Merton Street and the railway embankment of Bowling curve, behind the shortest block of terraced houses on Ripley Terrace.

After 3 years delay, in 1871, a start was made on an Anglican church; the Church of St Bartholomew. It was built at the top of Linton Street, between Vere St and Hall Lane and next to the railway line before it crossed Hall Lane. The church was not completed until 1874.

In 1875 but this time on a site south of Bowling Dyeworks, a Vicarage was added. A substantial detached house it stood in its own grounds near the corner of the present Bowling Park Drive and New Cross Street.

The village was completed six years later, in 1881, when ten almshouses were built fronting on to New Cross Street, again on the southern site but this time west of the main driveway to Bowling Dyeworks.

Both the vicarage and almshouses were built near Bowling Park which was opened in 1880  the year before the village was completed. The almshouses still survive.

The main sponsor for the industrial model village of Ripley Ville was Henry William Ripley 1813-1881, dye-master at the nearby Bowling Dyeworks. Although brought up as a Radical and Non-conformist, by the time Ripley Ville was built H W Ripley stood in opposition to Titus Salt and his ideas. Ripley’s story could be told as a ‘rugs to riches’ story but he was not a self-made man. By the late 1870s he was one of Bradford’s foremost capitalists; an industrialist, rentier, banker, local Member of Parliament and an establishment figure. A companion page on this site uses the quite common West Riding and Victorian expression of ‘a pattern man’ to distinguish Ripley from Titus Salt, the archetypal paternalist.

In a time when a housing market and choice in housing was starting to become available to those working men and their families that had the money, Ripley Ville was more of ‘a pattern village’. It was a pick and mix of buildings and ideas. These were chosen to double guess what working men and their families needed and what H W Ripley and those advising him and carrying through his plans thought was wanted in ‘working mens’ housing and from a village.  Looking back on the process, it can be seen that the village mixes elements of control, experiment, improvisation and compromise. It eventually achieved its unity in a piecemeal way. Though H W Ripley gave the land for the church of St Bartholomew and the vicarage, the costs of their building were borne elsewhere.

The village differed from Saltaire by offering the houses for sale; some of which were offered on a then novel rent-to-buy scheme run by the Messrs Ripleys.

Against the paternalism of Titus Salt, informed by his Christian values, his sense of social responsibility and commercial considerations, Ripleyville springs from a more politico-philanthropic set of calculations.

Though it overlaps, Ripley Ville, 1866 to 1881, was built slightly later than the UNESCO World Heritage site of Saltaire, which was built between 1853 and 1875.

Titus Salt’s vision for that village was part of a Victorian consensus across most sections of society and across the Worsted District (Bradford and Halifax) on what needed to be done in the mid-nineteenth century. Ripley Ville shows what followed on in a more conflicted decade and also the different political, religious and moral temper of Bradford and south Bradford in particular.

The Victorian industrial model village of Ripleyville has a key place in Bradford’s history. But only the Ripley Ville (Bowling Dyeworks) Almshouses survive from the original buildings of the village. All the rest of the buildings had been demolished by 1970.

The rediscovering Ripleyville web-site and project is about giving those with ancestors who lived there or people with other connections to the village or the various Works of Edward Ripley & Son the opportunity to share their stories and add to the store of knowledge about these.

It is now more than 40 years since the village known by residents as ‘the Villa, was last lived in. This web-site aims to make sure if doesn’t stay forgotten.

This site uses Akismet to reduce spam. Learn how your comment data is processed.

The content of this web-site is copyright R L (Bob) Walker and/or rediscoveringripleyville.wordpress.com 2012-2016

Unauthorised use and/or duplication of material without the express written permission from the author and/or owner of this blog and web-site is strictly prohibited.
Excerpts and links may be used provided that full and clear credit is given to R L (Bob) Walker & rediscoveringripleyville.wordpress.com with appropriate and specific direction to the original content.

Local not for profit organisations and educational institutions should apply for a license for use of copyrighted material.

If you think I am infringing your copyright or license, let me know. I will put it right. Every effort will be made to make good, within 7 days, any content subject to complaint, or otherwise requiring correction.

The aims of this web-site are to make more people aware that, for 100 years Bradford, West Yorkshire, had another industrial model village; 'Ripley Ville' and to restore the village and Bowling Dyeworks to their proper place in the story of 'Worstedopolis' (Victorian Bradford)

Most popular tags in posts

You can use Archives, Tag cloud or Categories to search

Housekeeping on this site

I have tried, to the best of my ability and knowledge, to make what appears in this blog accurate in historical terms. If you find something doesn’t ring true, let me know.

There are three kinds of images in this blog; images copyrighted but subject to permissions or license agreements, copies of images collected by me over the last 10 years that I understand to be out of copyright, license free or as yet undetermined and photos I have taken. If you want to get someone else to look at an image get them to come to this blog!

This blog, perhaps more than most blogs, is intended to be part of a joint endeavour aimed at rediscovering Ripleyville; south Bradford’s industrial model village. Comments are always welcome. For current options on longer contributions see 'Adding Content' page.
%d bloggers like this: